In this excursion, we will explore the Seochon (West Village) neighborhood of Seoul that sits between Gyeongbokgung Palace and Mt. Inwangsan. Composed of 13 small administrative districts called "dongs," the neighborhood is a showcase of the layers of 20th-century urban history. Korean-style houses (hanok) and winding alleys represent the 1930s-1950s, markets, commercial strips, and two-story houses the 1960s-1980s, concrete-tile residential buildings represent the 1990s-2000s, and new galleries and cafes represent the present. 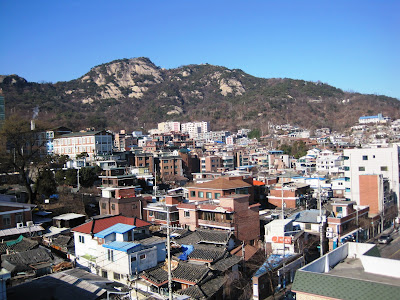 We will begin the tour at the entrance to Exit 3 of Gyeongbokgung Station and explore the alleys of Tongeui-dong, which include an eclectic mixture of hanok, Japanese colonial-period houses, and modern museums and galleries. In recent years, the area has become one of Seoul's newest art districts, and will drop into a few galleries along the way. From Tongeui-dong, we will follow alleys through Changseong-dong on our way to Hyoja-dong where will visit the Shin Ik-hee's house. Sin was a politician in the 1950s and his house is an attractive example of a mid-20th-century hanok.

Moving across Chahamunno, the main street in the area, we will visit the Tongin Market, one of the most active open markets in Seoul. From here, we will walk to Nusang-dong, an area crowded with four-story multi-family residences, stopping by several interesting buildings on our way to the newly restored Suseongdong Gyegok, a natural historic site. Next, we will wander through alleys in Nuha-dong and stop at the first hanok renovated with support from the city of Seoul under a renovation program that began in 2010. We will wander more alleys lined with hanok and make our way to Chebu-dong where we will explore some of the most interesting alleys in Seoul. On the way, we will visit several hanok, a brick church, and a small Buddhist temple. We will end our tour at the Gyeongbokgung Station.